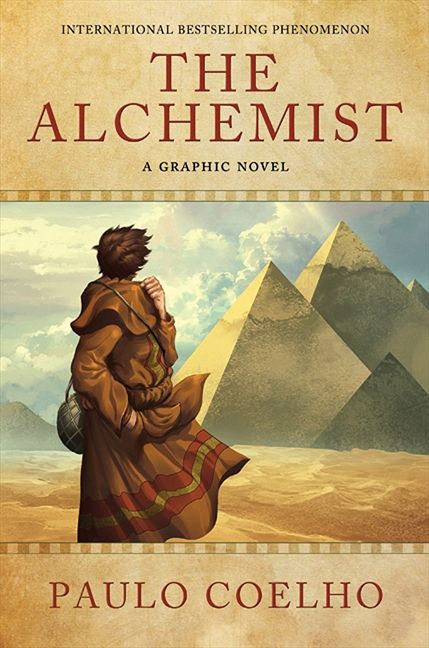 Today I am going to talk about one of the most famous and reviewed books on the internet, The Alchemist by Paulo Coelho which follows the story of Santiago, a young shepherd from Andalusia who has a recurring dream where a child tells him that he will find a treasure beneath the Egyptian pyramids. After consulting with a Gypsy and meeting Melchizedek, the King of Salem he sells his flock and embarks on a journey to the desert where he encounters many events and people that test his will and resolution, including a mysterious alchemist.

The Alchemist is an adventurous novel and its a fine example of “Magic Realism” where magic and reality interweave. It is an allegorical fable disguised as a self-help book, rich in symbols most notably the alchemy itself, which is not all about magic rather about the way of being and living in the world. I really loved the transcendental writing style and here a list of a few important lessons from the book that is close to my heart.

Melchizedek tells Santiago a tale about a boy who is sent to the wisest man in the world by his father in order to learn about the meaning of happiness. Once reached the palace, the boy meets the man and asks the question. The wise man who does not have enough time to answer him gives him the task to explore the artistry and attractions of his palace in two hours while holding a spoon with two drops of oil. After two hours the boy comes back and the man asks him about the palace but the boy confesses he was too busy making sure the spoon wouldn’t spill the oil. The man gives him another two hours. This time the boy comes back excited after exploring every corner of the palace but he forgets about the drops of oil. The wise man then explains the boy that the true meaning of happiness is two explore and enjoy the beauty while holding the spoon without spilling. The tale is simply an analogy to explain that you don’t have to be miserable in order to achieve your dreams. Happiness is experiencing the beauty of life without forgetting about your purpose and goals.

❤ Life is interesting when you have a dream ❤

When we are young we all know what our personal legend or dream is because we are not afraid of losing anything but as we grow older the willingness to chase our dreams decreases as responsibilities tend to pile up.

“It’s the possibility of having a dream come true that makes life interesting.”

Lack of purpose will make you no different than a sheep which are metaphorically used in the book to represent people who are content to just exist and follow others as long as they get the bare minimum resources to survive.

The book specifically mentions about recognising omens, good or bad. Anything happening around you has a purpose it is your duty to understand their motive and what they are trying to tell you. I take this as a figurative way of trusting your guts. Stir clearly away from negativity before it sucks the soul out of you. If you choose to ignore the omens they will eventually disappear. If you don’t follow your dream you will end up living a monotonous life when each day is the same and you will fail to recognise the good things that happen in life.

“There is only one thing that makes a dream impossible to achieve: the fear of failure.”

Pretty straightforward statement. If you dwell on the past you can never enjoy what you have in the present and be able to shape a better future. While I don’t believe in YOLO, my personal motto is to enjoy the little things that matter to you every day but also be focused on being someone your future self would be thankful for, which brings to the next lesson.

“The simple things are also the most extraordinary things, and only the wise can see them.”

When we strive to become better than we are, everything around us becomes better too.

An example is when Santiago is told that alchemists spend so many years in their own lab that they forget about the materialistic and temporal things in life. The purification of the metal led to the purifications of themselves. Not everyone can be alchemist despite years of knowledge and trials because what they care about is the end treasure rather than the journey and the difficulties that come with it. Some people just want to pick the rose but don’t want to get hurt by the thorns. Makes sense? When you commit to achieving a dream, you grow and be a better version of yourself and that’s solely because it required the best of you in order to reach that goal. People who go through hardship tend to be wiser and more humble because they know the price of their actions.

There are many other subtle lessons in the book to pick up, I only chose what was relevant to me. Overall it was a good read, surely not life changing but there is something mystical about this journey that will compel you to think about your life choices. I will end today’s review with Paulo Coelho’s most famous quote from The Alchemist for you to reflect on:

“And, when you want something, all the universe conspires in helping you to achieve it.”

Not currently reading anything.